Third-party controllers, some are great, some are awful and almost all of us have used them in one form or another. Whether it was to get a cheap second player pad for our new console or to try and enhance our gameplay they've been with us since at least the days of the Atari 2600. The Genesis is no stranger to peripherals designed by other companies, and today I'd like to talk about one.

If you own a Sega Genesis, you're well aware that having a six-button controller is a must, especially if you're a fighting game fan though many other genres make use of the extra buttons too. Sega's first official offering is considered fantastic by a lot of people, including myself, but for some reason I always enjoyed the size and shape of the original three-button pad more. Anyone with long, skinny fingers like mine probably feels the same. This lead me on a search that eventually ended with a purchase of the Competition PRO, Series III controller by Honey Bee (model number SG-18). 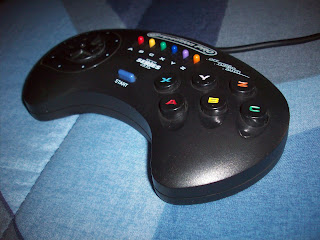 At first I was a bit apprehensive, their earlier Competition PRO controller (which was adopted by Tectoy as the Genesis model 3 pack-in controller) was a bit cheap feeling and with a poor directional pad. It also had very loose buttons that would rattle when the controller was shaken. The controller also had the look of the three-button pad, but it was unfortunately quite a bit smaller.

Thankfully when designing the Series III they made some great improvements as well as some cool additions that have made it my controller of choice. This time the controller is the same size and shape of the official three-button, though slighty thicker. The buttons are smaller than the three-button controller but are all the same size as each other and aligned diagonally as you'd expect. The spacing might be a bit too far for some people, so keep that in mind if you already have trouble hitting all the buttons you need to on the standard controllers.

I find the build quality to be generally good. The buttons still rattle when the controller is shaken but when in use they're firm and deliver acceptable feedback. The directional pad is also great, almost on par with the stellar official one. The mode button is also situated on the controller's right shoulder much like Sega's original six-button design. 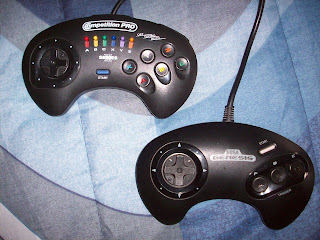 If this were all the controller offered I would already be sold. For someone looking for the feel of the three-button pad and the functionality of the six-button one, I haven't come across any other controller that has delivered better than this one. However, this brings us to one of the coolest features of the controller: the turbo switches!

Most of these third-party controllers come with a turbo feature but it's almost always an all-or-nothing affair. You turn turbo on and you have to deal with turbo effecting all of your controls. This can be pretty nerve wracking if you need to be jumping and shooting with turbo, but the turbo switch cripples your jumping ability. This controller shares a feature with Sega's six-button arcade stick by having a specific switch for each button meaning you can customize which buttons will turbo fire and which buttons won't. Very cool and occasionally very useful. The switches also have a third setting for auto-fire which is another great and slightly more uncommon feature.

You may have noticed by now the varying colors of the switches and buttons and as you might have guessed they're color coded which means matching a switch to a button takes only a split second. This is a very simple idea that I thought was very helpful and clever.

The final feature is the useless but obligatory slow function which is essentially just turbo-fire for your start button. The switch for this  is oddly located on the back of the controller and I didn't even realize it had a slow function at first. Nevertheless it's there in-case you were worried about it. 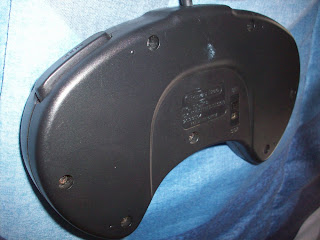 My controller states that it's the registered U.K. design. I'm not sure if it was ever officially released in the United States but it works fine on machines from any region and it's not too tough to hunt down or too expensive. If you're comfortable with your current six-button controller this one isn't a must buy, but if you're like me and want that three-button feel then this is a great purchase and it might just become your primary Genesis pad. The turbo and auto-fire features are a great plus as well. Overall the Competition PRO, Series III gets a worthy thumbs up.
Posted by Gunstar Green at 1:30 PM