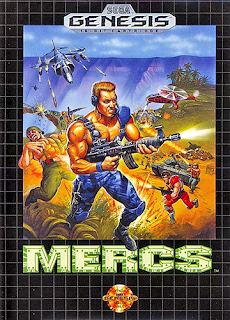 Suspenders are badass in this universe.
The recent fad of releasing sequels to classic games like Contra 4, Mega Man 9 and even Sonic the Hedgehog 4 was responsible for a fun but forgettable sequel to Capcom's classic arcade title Commando in the form of Wolf of the Battlefield: Commando 3. It was named this because "Wolf of the Battlefield" is the English translation of Commando's Japanese name, Senjō no Ōkami. This still left some people wondering; where the hell was Commando 2?

Well it was in arcades of course, and for our purposes it was lovingly ported to the Sega Genesis. The only problem is the game wasn't brought to the west as Commando 2 but under the completely new moniker, Mercs, which is short for mercenaries also known as guns for hire or soldiers of fortune. Though this name fits pretty well with the the game's mercenary soldier storyline it makes little sense that Capcom didn't call it Commando 2 as the original was a well loved arcade classic and surely it would have gotten a lot more attention if it were branded with that title. Was it because they had already billed Bionic Commando for the NES as a spiritual sequel? No matter what the case is I've heard many people call Mercs a good Commando clone only to be genuinely surprised to find out that the game is actually the honest-to-goodness Commando 2. 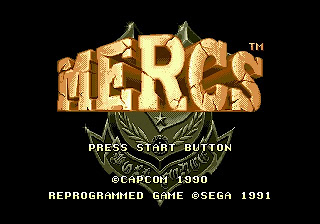 Because calling it Commando 2 was too boring?
For those unfamiliar with Commando it was an originally an arcade game released by Capcom in 1985. It is considered the father of the top-down view "run'n gun" genre. You take the role of Super Joe, a generic soldier, and scroll vertically up the screen with a rifle and and grenades to fight off waves of attacking soldiers. This simple concept inspired many imitators such as SNK's Ikari Warriors franchise and the game was ported to just about every home gaming machine of the era. 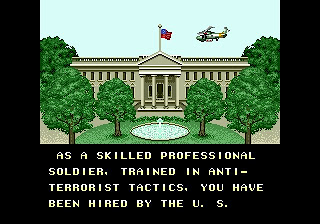 That helicopter just swoops in and takes the president. Seriously.
Commando's follow-up, Mercs, came in 1991 and was ported to the Genesis that same year. While the game isn't vastly different in the sense that you still scroll upwards and shoot at enemy soldiers indiscriminately, it was a major overhaul from the simple design of the original. Capcom took inspiration from other "shoot'em up" games of the time incorporating different weapons and power ups instead of just a simple rifle. You could now upgrade the power of your base rifle, a wider spread shot, a powerful bazooka and even a flame thrower. In a further nod to shmup game design the grenades were replaced with a bomb that killed all enemies on-screen. Other than weapons, power-ups and bombs you also found items that lengthened your health bar or restored your heath such as medical kits and food. Speaking of which, the health-bar is another major change from the original Commando where you died in one hit and it's a very welcome one that makes the game a lot more manageable. The gameplay also focuses more on dodging than Commando which had a greater emphasis on taking cover behind objects. 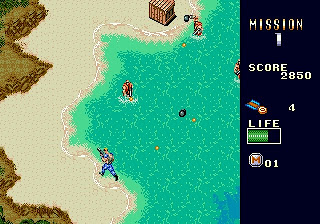 A nice beach outing ruined by soldiers in bright orange.
You also aren't limited to fighting enemy soldiers who themselves come in different varieties with different weapons. Hard to destroy enemy vehicles and powerful bosses at the end of every level also stand in your way. You're not entirely outmatched however as occasionally you stumble across empty vehicles like Jeeps and even tanks as well as fixed gun emplacements which you can use against your enemies, a neat innovation to the genre. 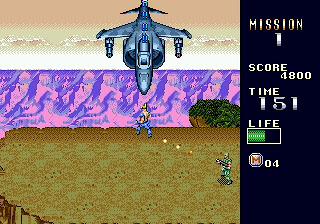 It takes a psycho to attack a Harrier jet head-on.
The levels are fairly short, as is the game. Your mission is simply to rescue the president of the United States from terrorists of some fictional country. Once you manage to acquire the dodging and shooting skills needed to complete the game there's about 20-30 minutes of game time from start to finish. The difficulty level is adjustable and you've got a few continues to help you get through the game. Don't let the length put you off however because Mercs is arcade fun at its finest and is one of those games you'll pick up and play through time and time again. The biggest gripe against Mercs is its lack of multiplayer support which was possibly done due to technical limitations. I imagine slowdown may have occurred with more than one player. This is unfortunate because the three-player mode is one of the main draws of the Mercs arcade cabinet. 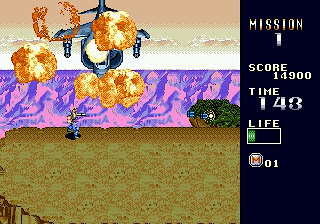 It takes man's man to blow it up.
But wait, the game's arcade mode isn't the only thing offered here! Mercs also comes with an "original mode" which takes the graphics and bosses of the arcade mode and mixes them into new levels with added gameplay elements. With no continues, original mode is more difficult than the arcade mode but includes additional characters you can rescue and switch between. Each character has a different weapon with your first character wielding the default machine gun. Between levels you can access a weapon shop and spend money you've earned from defeating enemies to upgrade your weapons. The story is different and instead of rescuing the president it revolves around invading a hostile nation to prevent them from becoming a threat to world peace. Honestly I prefer playing through the quick and simple arcade mode more but the original mode was a decent effort to add more longevity to the home version of the game. 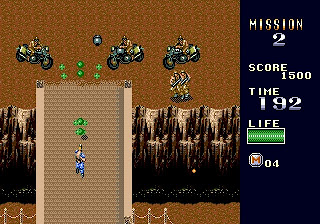 Motorcycle gang trying to enforce a bridge toll?
The graphics of Mercs are as to be expected. They're slightly pixelated and less colorful than the arcade version but manage to look great. I still found the game to be very colorful and detailed just not as colorful as it looks in the arcade. Using the flamethrower to light enemy soldiers on fire and reduce them to ashes is really something that needs to be seen in action to be appreciated. Most of the bosses are big and attractive and the explosions are plentiful and satisfying. Much of the environment is destructible and some vehicles and bosses have several phases of destructibility to them. I really have no complaints here. The graphics expertly convey the game's chaotic action and even your little soldier guy is well animated. 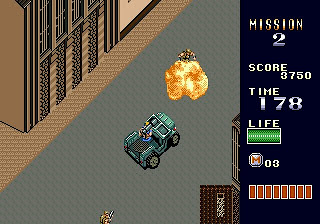 I find rockets more effective than beeping my horn.
The sound is mostly good though the majority of the sound effects are rather weak and undistinguished. The music is classic Capcom greatness and will really get you into the game.

Mercs is an awesome arcade style shooting game and a fantastic, near perfect port. It takes elements from the original Commando and contemporary shmups and creates a wild experience with hordes of enemies and brutal bosses. The arcade mode is short and sweet and the original mode is a serious challenge. Mercs is one of the standout titles of the top down "run'n gun" genre and is still loads of fun to waste the occasional half hour on. 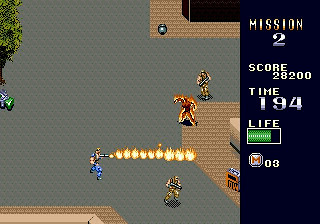 Flamethrowers should be required in all video games.
Scoring:

Presentation: 8 It's got a generic story but at least it tries. The original mode adds a map between levels and an item shop and tries to add some depth to the game. The arcade mode tries to add a little story by marking the level bosses as important objectives. It translates the arcade game faithfully and there's not much else you really need from a game like this.

Gameplay: 8 Mercs is incredibly fun especially if you're a fan of the genre. The four weapons each have their uses and get cooler as they upgrade. The bosses are neat and fun to fight and blowing away wave after wave of grunts is very satisfying. Especially with the flamethrower. My only complaints are that the length of the levels is really too short and I had to take another point off for the lack of multiplayer which was a major feature in the arcade original.

Graphics: 8 It's not the most fantastic thing you'll see on the Genesis and it's a little rougher than the arcade version but overall it's colorful, attractive and detailed.

Sound: 8 The sound effects aren't memorable for better or worse but it's got a rocking soundtrack courtesy of the musical mastery of Capcom's composers.

Lasting Appeal: 8 This is not a game you're going to sit down and play for hours at a time but it is a game you'll most likely pick up when you're bored for a quick and satisfying play-through. It's a timeless arcade action title that you'll find yourself coming back to each time you peruse your Genesis collection.

Collector: Mercs is yet another port of a classic arcade game to the Genesis and is the sequel to the incredibly influential Commando. It can be had for only a few bucks so it should join your collection as soon as possible.

Gamer: Hardcore shooter fans will really love this one and even gamers who are new to the genre should be able to handle the arcade mode after a little practice. I say it's definitely worth a shot. You can rarely go wrong with Capcom.
Posted by Gunstar Green at 8:34 AM